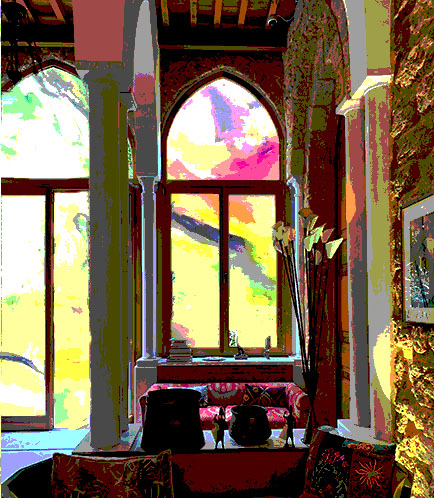 An Interview with Nabil Debs

At 6pm on the 4th of August 2020,  Lebanon’s women, men, and children lived through one of the most evil events in the recent history of world capitals. Many lost their lives, 7,000 were physically injured, and all were brutally broken-hearted at the sight of Beirut’s disfiguration.

It is known as The Beirut Blast, a brutal detonation of massive amounts of ammonium nitrate. The combustion occurred out of Beirut’s port which lead the country into its darkest day yet.

Up until that afternoon, before the blast took over, the now beloved Arthaus of Beirut was getting ready to receive city-goers for the official opening at its Rue Gouraud location in Gemmayze.

Collage by Mira El-Khalil using an original photograph from within the Arthaus and  “Promesse” a painting by Solange Tarazi.

The Story of Nabil Debs

During my visit to Beirut this summer, I met with Nabil at Arthaus and he was kind to share his and his wife Zoe’s story and tell me about how they came to open the space. His story will resonate with patriotics, dreamers, and those who have inherited a love for family.

Nabil begins by sharing that his professional background is based in finance but that his interest in art and architecture came about naturally through his upbringing amongst family members who encouraged discussions about heritage and the arts. “My aunt was a painter,” he says.  I immediately understood what he meant was more than a passing detail and that if his aunt, Solange Tarazi, was a painter, that meant that he felt the need to create as he was raised amongst specific types of discussions. For many painters and participants of the art community that I have met, including myself, the initial effort towards the arts is usually inspired by our belongings, beginnings, and family.

When I first arrived at the Arthaus location I was very touched by the alley I had to walk in to get to the house’s entrance. As a child, I had lived right off Gouraud street with my parents and knew how special it was to experience Gemmayze’s sub-streets and that we were lucky to be able to sustain that authentic but increasingly rare scape of Beirut, especially after the blast.

The Arthaus is a chance for leisure where visiting for a coffee becomes a gainful experience of traditional Lebanese architecture. The space is adorned with pieces of the Debs’s personal art collection, objects that have been purposely and whole-heartedly acquired to curate a collective for the family to keep and love.

As he showed me around, Nabil shared that he bought the piece that started his collection at 13 years old with his carefully saved pocket money. He loves works that touch him one way or another, he cares to connect with the aesthetic of a painting and he never kept things with the purpose of becoming a collector he just subsequently became one as he continued to find new pieces to love.

“Initially, we lived here,” he said. Every space Nabil turned into a model of hospitality resembling Arthaus Beirut, was initially a home for him and his wife Zoe that they bought and developed until they couldn’t keep it to themselves. Between Cuba, France, and England, the couple created homes which they then turned into boutique hotels including resto-bars and allowed a heritage-infused experience to be shared with guests.

The Arthaus Beirut belonged to the Debs family as a housing property mostly built by Nabil’s grandfather and grandfather’s brothers in the early 1900s.

As we walked back toward the entrance, Nabil expressed how devastating it was to see the Arthaus façade fall to bits the day of the Beirut Bast. He remembers rushing out to help those in need on the streets and remembers how he slowly realized the magnitude of what had just occurred.

On the 4th of August 2020, Nabil and Zoe Debs decided to pick up the pieces and rebuild what was suddenly destroyed by the unescapable circumstances of a cursed country. Not only did they rebuild Arthaus, they immediately put together the largest participation by artists for an exhibition curated to raise funds for the Lebanese red cross and to help those in need after the tragic event.

In a torn and tired Beirut, Arthaus worked to offer the neighbourhood a place for refuge, art, and rebirth. Today the space invites music sessions, art exhibitions, and guest speakers to cultivate the worlds of its guests.

Works of artists such as Nadim Karam, Jorge Otero, Sebastian Nadjar and more can be explored at the Arthaus including that of guest exhibitors such as photographer Yann Charbonier.