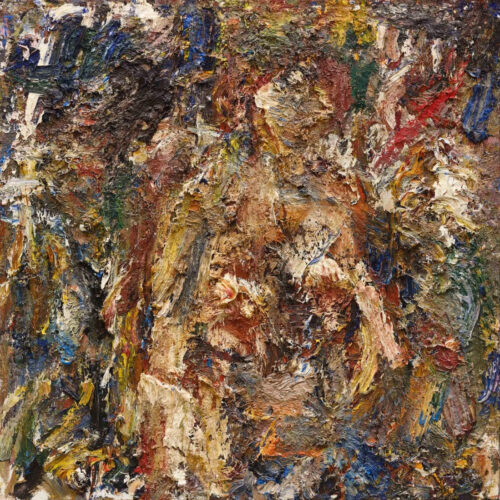 Once you enter the gallery space of Michael Werner (Upper east side New York), your eye will immediately fall on the view of the nude paintings by French painter Eugene Leroy.  Leroy lived most of his life in Tourcoing, France, near the Belgian border. Emulating the nature scape of his country of origin, Leroy uses the mediums of light and paint at equal value as he works his nudes. 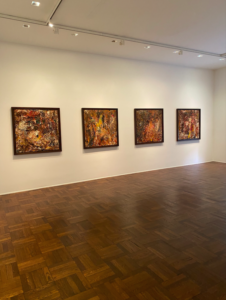 His paintings have less to do with the form of the bodily figures and their flesh and more to do with their memorialization through the dissolved paints thickly expressed on the 39 ¼ x 39 ¼ canvas. 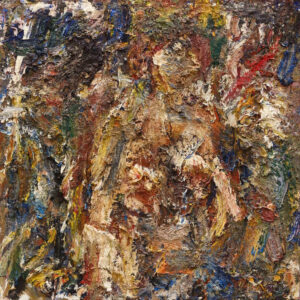 Only through the glints of light are the subjects visible. Leroy’s muse is Marina Bourdoncle, a fellow artist he met in 1986 and with whom he lived until the end of his life in 2000. 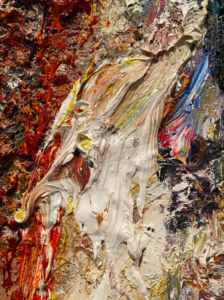 Painting from life is of necessity to Leroy, and that lends value to his painting. As expressed in the film by John Ruskin titled “Values”, 1853, “Art is valuable or otherwise, only as it expresses the personality, activity, and living perception of a good and great human soul.” His paintings are not “the work of limbs and fingers, but of the soul, aided, according to the necessities, distinguished in essence from all products of those inferior powers unhelped by the soul.”

The manhood which has light in itself can gain strength the moment man stands forth with seriousness. Then the work becomes art, perfect in honor, priceless in value, boundless in power. The thoughts that arise out of Leroy’s paintings are that the body and soul are not separable and all art is in an expression of the one, by and through the other. The necessity of the whole man or woman being in his work means the manhood itself and the memorialization of his muse in a painterly manner. By the work of the soul, the viewer understands the work of the entire immortal creature derived from a quick, perceptive, and eager heart dealt with by the hands, under the direct guidance of the higher powers.

The paint scattered across the canvas is evocative of the amalgamation of the body and soul that is central to the artist’s paintings. The delicate manipulations of the colors in thick dabs of paint also convey a sense of deep materiality that leaves the viewer with the feeling of great connection between the painter and his muse Marina despite the uneven power dynamic. The subject only served him as a vehicle to capture the movement of light, the manhood, but nonetheless, in the absence of her being, the painting would not have materialized.

The reception of Leroy’s latest body of work has been torn between dispassionate admiration and fervent dislike. All of the paintings at the gallery are of the same size and priced at $175,000 each. After his first exhibition with Michael Werner in Cologne in 1983, his paintings have been in major American and European collections and featured in exhibitions at the Albright-Knox Art Gallery, Buffalo New York; The Power Plant, Toronto; Stedlijk Van Abbemuseum, Eindhoven; Museum Van Hedendaagse Kunst, Gent; Musée d’Art moderne de la Ville de Paris; Musée d’Art Moderne et d’Art Contemporain, Nice; Sao Paulo Bienal, Brazil; and Documenta IX, Kassel.

All images are provided by the article writer.

Ⓒ Serena Lee is an art advisor and curator. She has a Bachelor’s degree in Economics from Cornell University and is a candidate for a Master’s Degree in Art Business.