What is left of the city? 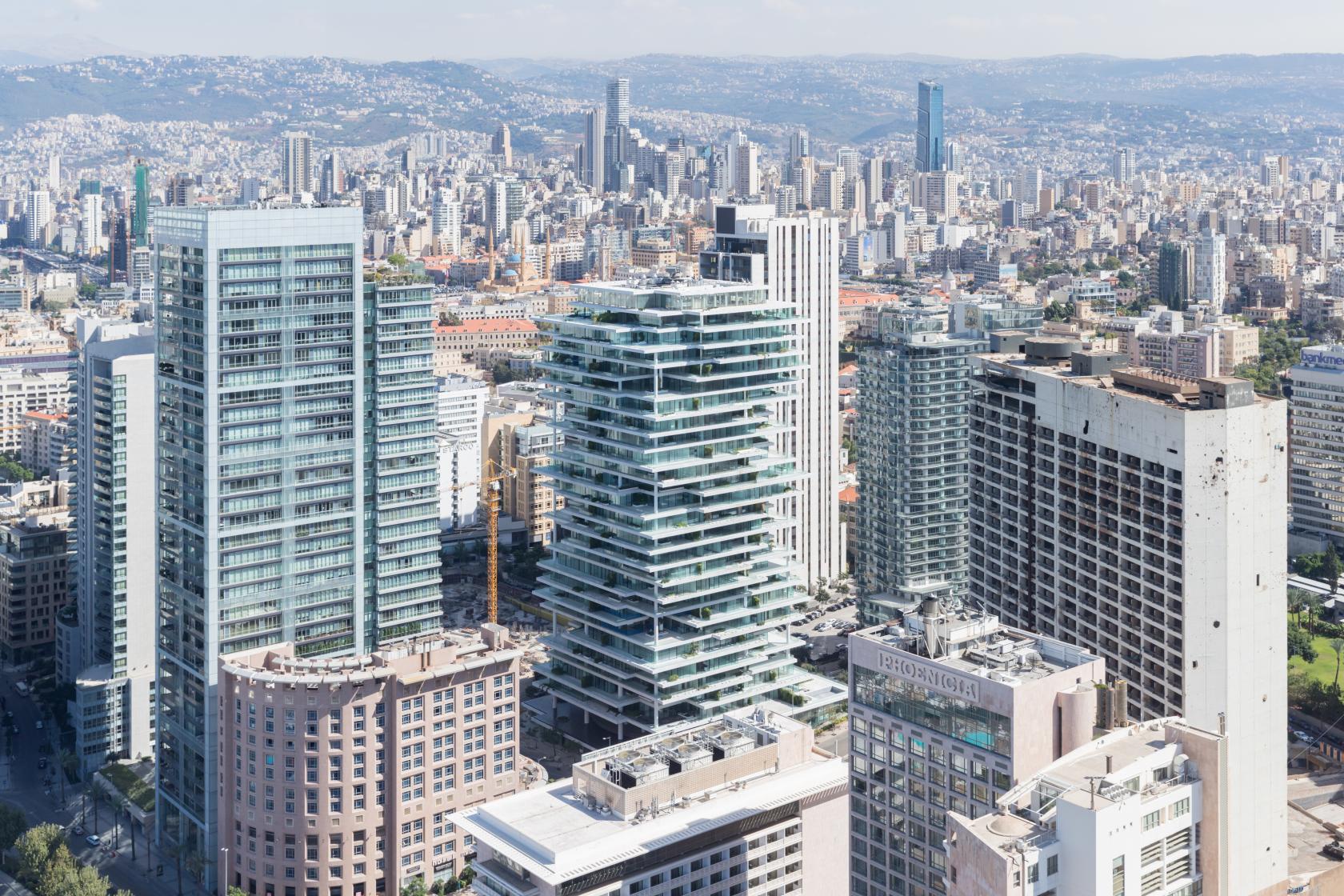 What is left of the city?

In order to understand the damages post-blast,  it is important to take a look back at when Beirut’s architecture scene was undergoing major changes. While the city’s streets are haunted by many wars, the classical Lebanese architecture is in conversation with the luxurious post-war development of residential high-rises which gives Beirut a certain flair as well as polarity.

Beirut Souks, the well-known commercial compound designed by Spanish architect Rafael Moneo, is a completed project which was well enjoyed by the citizens and tourists. While the Souks were successfully open to the public, new works of art started to emerge1:

-The vertically layered Beirut Terraces, designed by French architects Herzog & De Meuron, give each floor a unique view of their surroundings and the Mediterranean sea. 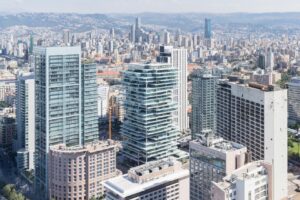 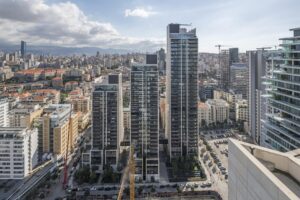 -3 Beirut, located in Beirut’s Central District, is comprised of three towers of residential and commercial entities by Foster + Partners. The landmark was intended to bring a new social focus to the city.

-The architecturally distinct and high-end luxurious yacht club of Zaitunay Bay by architect Steven Holl, was curated in the hopes of a master plan for the entire seaside area. 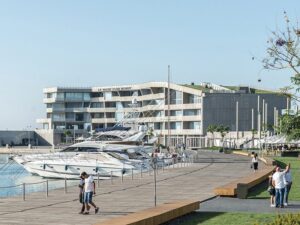 -The multi-residential compounds by the renowned local architect Bernard Khoury lining up towards the sea, as well as the dramatic Factory Lofts, occupying a plot in an abandoned industrial area. 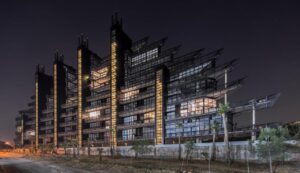 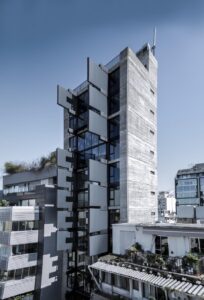 -Aishti Foundation designed by Adjaye Associates, occupying the previous site of warehouses, sits before the shoreline as if a giant container was occupying the space, revealing a wide variety of retails and an art gallery. 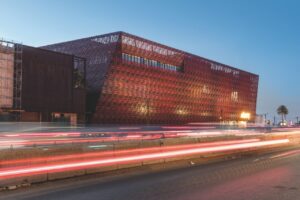 -Lina Ghotmeh’s Stone Garden is a 13-story apartment block of corrugated concrete, looking (and acting during the blast) like a bunker with a porous green façade.

Some of the few other masterpieces that never got to the finish line include the new ABC outlet department store designed by the late Zaha Hadid, the new Beirut Museum of Art (BeMA) designed by HW architecture, and Snohetta’s Banque Libano Francaise (BLF) headquarters, that is currently collapsing with other banking systems in Lebanon. (See below). 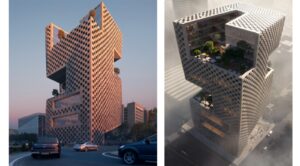 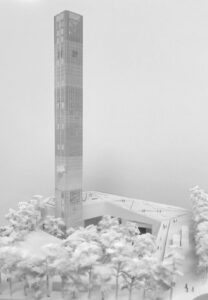 To be embraced or not, one thing is for sure, Beirut was getting more international exposure, which was obviously giving way to more investment opportunities in the country. Not only was the architectural success of Beirut sparking the return of expatriates, who started growing their businesses based in Beirut, but all of the landscape’s development was building up in the years 2018-2019 to an even greater foreplan for the year 2020.

BOOM, in a moment, disaster struck. Everything was hurt or gone, the people, their homes, and their dreams. The city’s urban and social fabrics were destroyed. There are still many questions and uncertainties regarding the events of August 4 2020 in Beirut, however, what is certain are the great losses left by that day.

The port of Beirut area includes the Beirut Central District and Karantina, the entire Achrafieh District and its neighborhoods, including Gemmayzeh, Mar Mikhael, Saifi, Geitawi, Badawi and Sursock were deeply affected3. 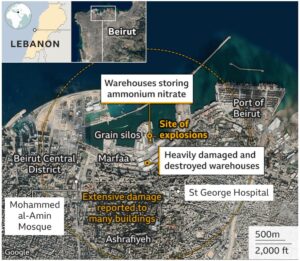 Map provided by the BBC

To briefly quote Ahmed Mohsen4 in Downtown Beirut: A city of ghosts, “..many Lebanese may take pride in their shiny new Beirut city center. The final product, however, is a city out of place where many more may not feel at home. Most who visit Beirut’s commercial downtown area will say that the area seems rather “dead” to be the center of the Eastern Mediterranean’s most vibrant and cosmopolitan port city.”

In the wake of the largest explosion to ever occur in this part of the Mediterranean and given the track record of the government, the urgency for reconstruction and restoration by non-governmental entities was driven by the following idea5: no one wanted to leave the streets subject to demolition, only to find it, later on, built a-new with another ghost town (referencing Mohsen). Moreso, it didn’t take much time for real-estate developers to start looming over owners to sell their plot and make way for new developments, in an urban fabric very different from that of Downtown Beirut. Also, looking at it from an architectural point of view, what drove most of the reconstruction works done so far in Mar Mikhael and Gemmayzeh is the fact that they contained many icons of the 19th-century Lebanese architecture, a romantic fusion of the Mediterranean country’s traditional stone houses with Ottoman and European styles. Appropriated by the Lebanese people, these streets became the holders of the last remaining heritage of the urban Beirut, the culture and soul of Beirut6, and, home to multiple disciplinaries, such as architects, designers, artists, and old artisans. 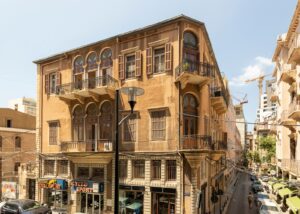 Many NGOs7, with the help of professionals in the field, architects and engineers to craftsmen, teamed up to salvage the remaining of most buildings, bring back individuals to their homes, and keep the social fabric of these areas for the future to come. Most noticeable you’ll find the NGO Offre-Joie that led numerous reconstructions and restorations with local volunteers to shelter and consolidate homes before weather changes. Below are before and after photos of residential buildings damaged and restored. 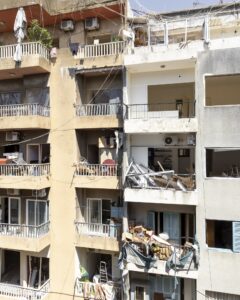 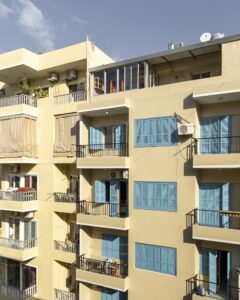 You may have also seen amazing pictures taken from local photographer Dia Mrad8, partnering with the Beirut Heritage Initiative, another independent collective, launched to rehabilitate structures bearing the Ottoman Empire’s and the French Mandate’s architectural expressions, as well as buildings belonging to Beirut’s early Modernist period. Mrad contributed in showing the pre-and post-blast pictures of some residences to enlighten people as to why renovations were so important, and to help collect funds to restore the remaining establishments in danger. 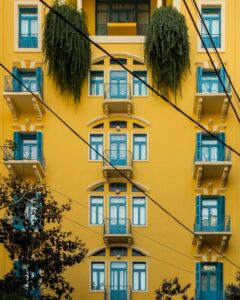 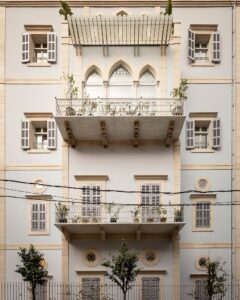 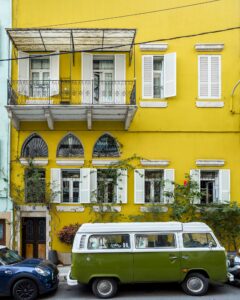 Beirut before the blast, taken by photographer Dia Mrad.

Other relief organizations included Together Li Beirut and the International Alliance for the Protection of Heritage in Conflict Areas (ALIPH). All of them, with local volunteers, with the people, have become the substitute for an absent and corrupted government. But anyway, I believe that to be a good thing. They say when you want radical change to happen, you need to be at the front seat making it happen.

Seeing recent renovations done, one building after the other, you can feel it coming back, the feeling of belongingness to the streets of Mar Mikhael and Gemmayzeh, but even better than before. Before the blast, the old buildings had a charm, but not all people had the financial means to consolidate their structure for generations to come, or renovate their façade and sharpen their look. Now, cleaned and refurbished, they look like a new-old heritage that’s going to last for hundreds of years. It was the government’s role to fund and help owners in maintaining the heritage alive, but after the blast, it’s being done through international funding and local volunteering.

Moving past the reconstruction of heritage, we face a dilemma9 with “new” damaged buildings and the contemporary architecture of Beirut. Based on an article featuring local architects like Lina Ghotmeh, Bernard Khoury, and Paul Kaloustian, the answer seems to be clear: cover and rebuild all damaged openings to give residents back a sheltering home. Below, photos of Lina Ghotmeh’s and Bernard Khoury’s residential complex, close enough to the port. 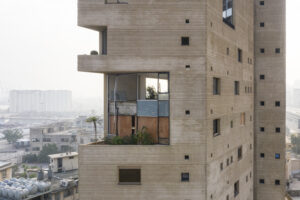 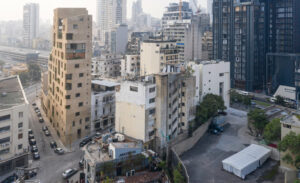 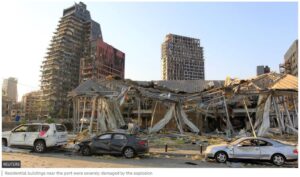 Bernard Khoury’s residential complex suffered heavy damages due to its proximity to the port of Beirut.

With some distance it is possible to figure out how to invent something new, corresponding with the present and future of these creations, in relation to the disaster that had occurred. They may not be part of our future heritage, but contemporary creations can hold the scars of a certain event and propose new ways of inhabiting and reclaiming the social and urban way of life in the city.

Finally, and with hope in the future of Beirut’s landscape, the primary focus is on maintaining, restoring, and renovating existing buildings. It is also about creating new spaces and ways of living with existing structures. Perhaps Beirut’s international architectural input will have to wait a bit longer, ‘til all crises are resolved.

1.Based on the author’s personal references and an article in Wallpaper magazine, Architecture. High contrast: we chart Beirut’s ever-changing architecture scene. By Alice Bucknell. 9th of August 2018.

2.Joseph Erdahy. Beirut has rebuilt before; here’s how the city will do it again. National Geographic Website, Travel, how Beirut is rebuilding after the explosion. By Abby Sewell. Beirut, 4th of September 2020.

4.Ahmed Mohsen is a Lebanese journalist whose articles cover many subjects such as cultural activities and migrant workers. His article “Downtown Beirut: A City of Ghosts?” was published on January 7, 2012 and posted on Al-Akhbar’s English language website.

6.Wired Magazine, Culture. As Lebanon’s government steps down, volunteers step up to rebuild. By Laura Mackenzie. 10th of August 2020.

7.Findings based on various articles. Article 1: Frame web magazine, Living. In the wake of the Beirut blast, Christele Harrouk questions how the future might look for the city and its people. By Christele Harrouk. 22nd of September 2020. Article 2: Beirut Heritage Initiative website, restoration manual. Article 3: NOW Lebanon magazine, Culture, Heritage. Shattered Yet Resilient. By Sally Abou Aljoud. 12th of October 2021. Article 4: the 961 Magazine, photos. 15+ Before & After photos of buildings restored after the Beirut blast. By Souad Lazkani, Photography by Dia Mrad. 21st of December 2020.

Ⓒ Manuella Haddad is currently the Junior architect at Antoine Tabet Associates, she is the former archives assistant at ALBA (the Lebanese Academy of Fine Arts). Haddad collaborated on the master plan for the redevelopment of Deckwaneh’s Industrial Hub and is the winner of Melanie Freiha’s Architecture Competition.