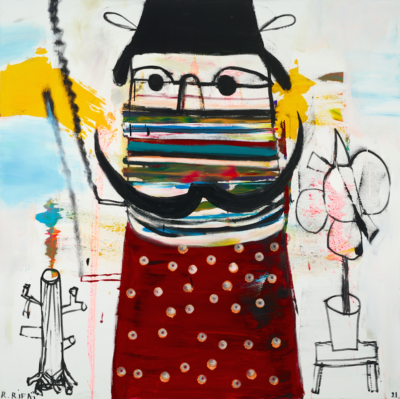 This text presents a  deeper understanding of Raouf Rifai’s art practice and sentiments written by the house specialist Mira El-Khalil.

“I lost my father at the age of seven years old”.

An upsetting fact to hear about anyone and something to be immediately moved by.

An insight that Dr. Raouf Rifai shared while he participated in a seminar about Cinema and Painting, hosted by Nadine Fayad Gallery in collaboration with Professor Rabih Haddad (Held Friday the 3rd of February 2022). 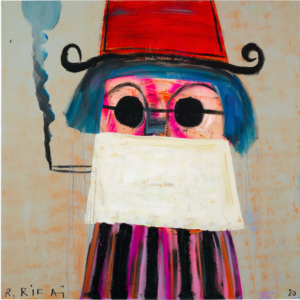 Raouf Rifai was born in Lebanon in 1954. The 1950s were a striving time for Lebanon. Whether near the bay of the fashionable and theatre-famous city of Beirut or across the rich in flavor and steady in development valley of the Bekaa (where Rifai originates), Lebanon was a sight to meet the world by. But as a boy, Rifai had his own struggles to face and his own hope to make. As his fate willed it, and with the talent bestowed upon him to tell stories through art, Rifai became a household name led by his incentive to share the hope he learned to weave. 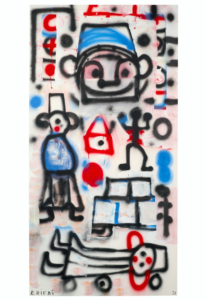 In 1995 Rifai obtained his PhD in Urbanism from the Sorbonne in Paris and previously completed his Bachelor’s degree in Decorative Arts from Beirut’s Academy of Fine Arts. In 2010, he was the first prize winner at the Sursock Museum’s Salon d’Automne in Beirut. Although his studies and research were great sources for inspiration and self-development, his famous imprint “Darwish” character, seen in his paintings in portrait or as part of a carnival, is suspected to have originated throughout the artist’s childhood. 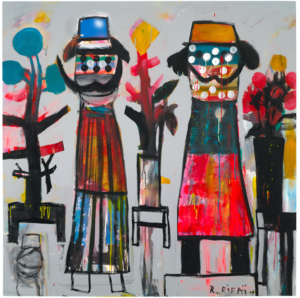 “We are all looking for a hero.”

In contemporary fashion, Rifai paints in acrylics. Rifai paints striking lines of contrasting hues, a naïve-like scene with petals and ice cream, and a traditional “tarboosh” hat, pouring out a long-mustached and peculiar character dressed in folkloric attire. An image filling its audience with instant joy or inescapable curiosities. 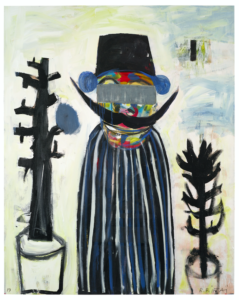 During the seminar held on the 3rd of February, the artist’s memories are recurring subjects as he describes the emergence of his famous personage. He affirms that artists’ subconscious is what fuels their creations and it is the childhood memories that affect the psychological motivation to share certain images of their imagination.

To see the selection of possible acquisitions of  Raouf Rifai’s paintings please follow the link below:

In Rifai’s case, he shares that he had lost his father at a fragile age, and whether he thought much about it or brushed it off, he was looking for a hero. He continues to reassure the panel that it is not necessarily circumstantial as we are all looking for a hero and that as a child the images of mass media showing emblems such as Mickey Mouse or several cinematic superheroes, encourage us all to look for that icon. A symbol of representation, and a hero of some sorts, Rifai’s “Darwish” becomes the folkloric mascot, our art market falls in love with. 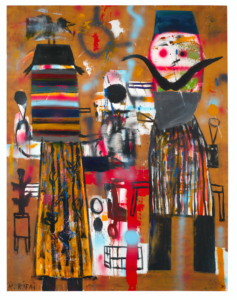 I invite you to explore the paintings of Raouf Rifai and attend their enveloping nature as they recount the stories of a Middle Eastern identity dancing in a carnival of memories, some sweet and some sour. Rifai’s paintings will leave a lasting impression through a hero for all, whether a girl from Beirut or a boy from Baalbek.

The works of Raouf Rifai are available for sale through The Dealership tab on the platform’s menu. The images featured in this article are included on The Dealership page.