The Story of Anas Al Braehe 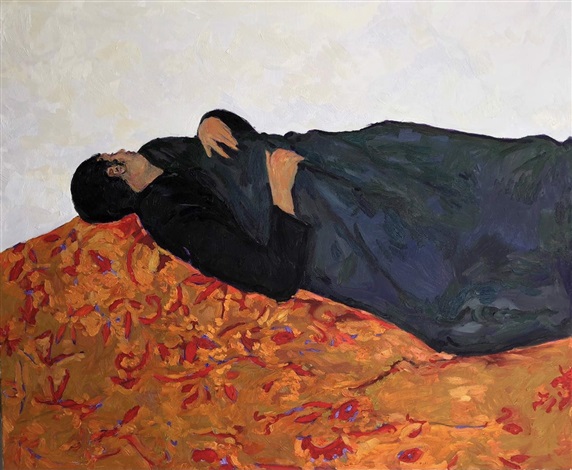 The Story of Anas Al Braehe

This feature is based on extensive research written in the Master’s degree dissertation by Mira El-Khalil for Sotheby’s Institute of Art of London in 2021. Further research about the artist is available in El-Khalil’s account through Sotheby’s Institute of Art and can be found through the American University of Beirut’s online library at the following address: https://libcat.aub.edu.lb/record=b2633326 .  Ⓒ  All images used in the article are provided by the artist.

Anas Al Braehe is a core case study in Mira El-Khalil’s research on artists from minorities. His work is an example of an innate talent that was formed in nature by the will of Al Braehe’s sensitivity to his special environment. El-Khalil saw in Al Braehe a talent like no other in the Beirut art scene and got to know him and his paintings through an in-depth interview lead for her Master’s degree dissertation. 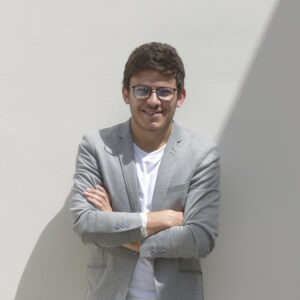 The following paragraphs are texts from pages 33 to 44 of The Druze: A Cultural Legacy in the Contemporary Art Market by Mira El-Khalil. They are parts of Chapter 2 that present the case study of Anas Al Braehe, his story, and the journey of his talent:

” Al Suwayda,  Syria, is where the artist was born in 1991… By the time Al Braehe was old enough to be accepted into his undergraduate program at the University of Fine Arts of Damascus, the university had expanded its campus and built a branch in Al Suwayda… it was in the contained environment of his village in Al Suwayda that he proceeded to practice his painting. It was by virtue of the artist’s development in that precise habitat, that the work was able to translate the talent in its authenticity and in accompaniment of cultural values inherited by the artist from his indigenous Druze surrounding. In an article published by the Atassi Arts and Culture Foundation, which focuses on Syrian artists, the artist is asked about his thoughts on critics comparing his work to the French impressionists, most notably Henri Matisse and Paul Gauguin. Al Braehe shares that he is flattered by these comments and that perhaps it is the common affinity towards nature in both his and the impressionists’ works, that ushers the critics to say so. He adds that he had been painting, long before he had access to the Internet and discovered who these maestros are.

Al Braehe unconsciously gives elements of nature their own character in his paintings….he saw in nature something that he wanted to share. But that desire, he says, started indoors and not outdoors. Al Braehe’s mother was a seamstress for the village. While he was not allowed into the fitting rooms where his mother would dress the women, a young Al Braehe hid under the table and watched as colorful fabric unfolded. He gathered colorful woolen threads from his mother’s studio and placed them side by side in the quest to find the most sight-provoking color combinations. This was at the root of his studies in coloring and soon enough, as he describes, everyone saw trees to be green and he knew that they were much more than one color. The artist explains that there is a reason why his coloring looks patchy, almost like a pattern sown on fabric. 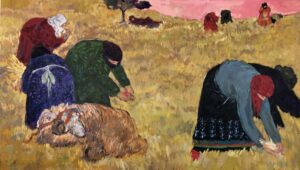 It is a tradition for the women in Al Suwayda to learn how to sew. The artist claims that if western art critics were to notice the bed sheets that his grandmother, who was a Shaykha (religious woman) sewed, they would immediately be reminded of Matisse’s paintings. Women in Al Suwayda sit in circles and sew fabrics and sheets as a social activity. This is where Anas Al Braehe deduces he got his staple style in painting. Although they do not identify as artists and work with their hands for the purpose of decorating their homes, the women in the village created a form of indigenous art that, as stated by Al Braehe, has influenced his complete body of work. Once Al Braehe graduated with his bachelor’s degree in 2014, he decided to work as a volunteer in refugee camps in light of the deteriorating socio-political situation in Syria. At that point, he was living off his volunteer work and sketching and painting around the sleeping refugees who he eventually noticed were finding a certain peace in participating in his craft. It was the same kind of peace he saw developing in the life of Manal, a young woman with Down’s Syndrome who became his muse in the village. Al Braehe noticed a correlation between the practice of art and ameliorated morals and decided then to pursue his master’s degree in Art Therapy at the Lebanese University. Thus, Al Braehe landed in Beirut, the country capital and the nest of a Levantine art scene, yet to be discovered by the young boy from Al Suwayda. From then, Al Braehe went on to his first solo exhibition, through an inevitable stairway which began by exhibiting one of his Manal paintings in the university group show. 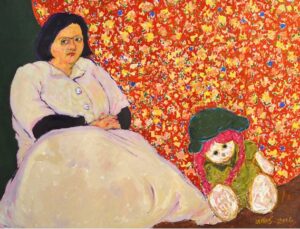 An oil painting of “Manal”, the artist’s muse, by Anas Al Braehe.

It is difficult to see the artist’s continuous success without the interference of a distinct catalyst, his current main gallerist, Saleh Barakat, who is known in Beirut through Agial Gallery and Saleh Barakat Gallery. In an interview with Barakat, the recognized gallerist explains how Al Braehe approached him and asked him to come and see paintings in his studio. Barakat had previously come across the artist’s works thanks to the exhibition “Manal” and knew that there was something very special there. From then on, Barakat took on Al Braehe as one of his artists and prioritized the growth of his craft over the demand of buyers. Barakat insists that beyond the gallery’s respected market value, his spaces are not commercial and that he wishes to be understood as a custodian of the Levant and that someone like Anas Al Braehe is able to help him defend this identity so long as he treats his talent wisely. Barakat explained that he saw in the artist an undoubtedly raw talent that could not have developed anywhere else than where Al Braehe was brought up. He continues to insist that reaching the full potential of such a talent cannot rely on the talent itself and that helping the artist become culturally educated about the history of art and the great Syrian, Lebanese, and Western painters who came before him is Barakat’s duty.

It is the artist’s talent and eagerness that gained the interest of the press during his first solo exhibition and later on the approval of the likes of Saleh Barakat as endorsements to Al Braehe’s career in the contemporary art market. During a visit to the artist’s studio on the 21st of July 2021, the artist shared the most recent paintings belonging to the “The Dream Catcher” series. The series, famous for the depiction of sleeping refugees, presents the texture of the sleeping quilts, painted to appear fluffy enough to sense the fleeting comfort of sleeping.”1 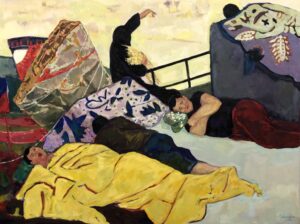 An oil painting courtesy of the artist Anas Al Braehe from his Dream Catcher collection.

Today, Anas Al Braehe is a celebrated artist around the world. The artist is currently being exhibited at Anita Rogers Gallery in New York City until the 27th of August 2022. According to a recent phone call with the artist, Al Braehe would like to share that he feels extremely blessed to be on his journey and one of his favorite accomplishments yet is entering the Institut Du Monde Arabe in Paris as a permanent part of the collection. 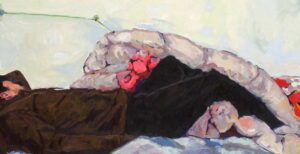 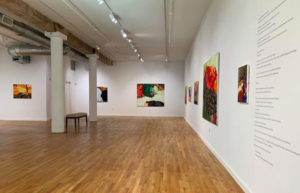