This feature is based on extensive research written in the Master’s degree dissertation by Mira El-Khalil for Sotheby’s Institute of Art of London in 2021. Further research about the artist is available in El-Khalil’s account through Sotheby’s Institute of Art and will be included in publications set to be released by 2023.  Ⓒ  All images used in the article are provided by the artist. 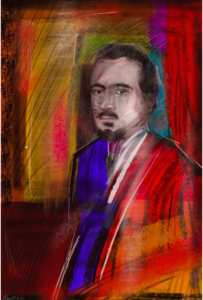 As he paves his way amongst the emerging talents in the art market of both the East and the West, I would like you to join me in the rapturous experience of being transported by the paintings and music of Ribal Molaeb. His identification as one of the most sought-after Lebanese painters is a title with which he will be inevitably crowned. 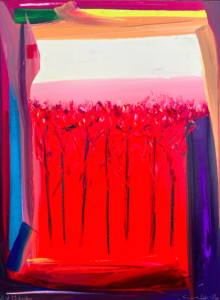 On the 28th of April 2021, Beirut is surprised by a solo exhibition announcing the arrival of a familiar name onto the contemporary art scene. Suddenly, the household name of Molaeb has the opportunity of continuity in the art market beyond the oeuvre of Jamil Molaeb. Through the doors of Janine Rubeiz Gallery, Ribal Molaeb (Molaeb) is now out of his previously sheltered and private artistic development. Molaeb was born in 1992 did not take a traditional route into his work as a painter. Before allowing himself to come forwards as an oil painter, he had been playing the violin since he was 6 years old and chose music overpainting as a profession in order to establish his own identity in the midst of his father’s overwhelming artistic success. Despite his success as a classical musician, he is now unleashed onto his canvases and has gained the approval of his father Jamil Molaeb, the great Lebanese painter. 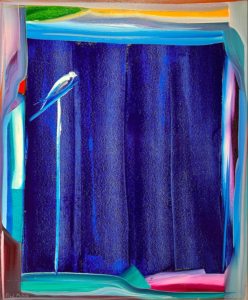 Ribal Molaeb had been in the vicinity of a career in the arts since he was born. Living in Baysour (Lebanese Village) and watching his father paint, eventually turned him into a young assistant in his father’s studio, participating in art practice as though it is, as the artist likes to describe it, his mother tongue. Watching his father paint and witnessing his father’s success, Molaeb shied away from pursuing a career in painting. Although he continued to paint, the artist decided to pursue, with much seriousness, a career in classical music, a field far from the pressures of having to reach a success similar to his father’s. The artist describes classical music as a western language, one that he had to study in order to speak, whereas painting had always been a part of him through his heritage in the village of Baysour.

At the age of 16, Molaeb left his village Baysour to follow his dreams of becoming a successful classical musician. The artist points out that he traveled straight from his village in Lebanon to Austria. However, when he set his mind on showcasing his paintings, Molaeb could not ignore his feelings about being noticed by gatekeepers in the Beirut art market to be the sign of approval that Lebanese painters look for while measuring their success. In the interview lead with the artist, Molaeb coveys how seriously he took his entry into Beirut through Janine Rubeiz Gallery not only as a Lebanese painter but as Jamil Molaeb’s sun. Meanwhile, before the artist’s debut in Beirut, he showed his work in Europe and specifically twice in Switzerland this year 2021.

Ribal Molaeb is particular in his artistry as his creation is both based on his visual expression of feeling and belonging as well as his longtime relationship with music. It is recounted by students in Molaeb’s school of Baysour, that while the children played in the garden during recess, he stayed indoors playing his violin. Similarly, while the artists of Beirut tackle environmental occurrences the scarring events in their city of Beirut, Molaeb stays true to his subjects of Lebanese landscape and spirituality through his personally depicted windows of melodic hues.

For information about acquiring art by Ribal Molaeb, kindly contact the house specialist Mira El-Khalil, as the artist is listed amongst those promoted on the House of Art Dealership.